After over one year I finally found time and leisure to write my next article. This time about finetuning AlexNet in pure TensorFlow 1.0. “AlexNet?” you might say, “So 2012’ish!” you might say. Well here are some reasons why I thought it’s worth doing anyway:

After finishing to write this article I ended up having written another very long post. Basically it is divided into two parts: In the first part I created a class to define the model graph of AlexNet together with a function to load the pretrained weights and in the second part how to actually use this class to finetune AlexNet on a new dataset. Although I recommend reading the first part, click here to skip the first part and go directly on how to finetune AlexNet.

And next: This is not an introduction neither to TensorFlow nor to finetuning or convolutional networks in general. I’ll explain most of the steps you need to do, but basic knowledge of TensorFlow and machine/deep learning is required to fully understand everything.

Getting the pretrained weights

Unlike VGG or Inception, TensorFlow doesn’t ship with a pretrained AlexNet. Caffe does, but it’s not to trivial to convert the weights manually in a structure usable by TensorFlow. Luckily Caffe to TensorFlow exists, a small conversion tool, to translate any *prototxt model definition from caffe to python code and a TensorFlow model, as well as conversion of the weights. I tried it on my own and it works pretty straight forward. Anyway, here you can download the already converted weights.

To start finetune AlexNet, we first have to create the so-called “Graph of the Model”. This is the same thing I defined for BatchNormalization in my last blog post but for the entire model. But don’t worry, we don’t have to do everything manually. Let’s first look onto the model structure as shown in the original paper:

Architecture of AlexNet, as shown in the original paper (link above).

Noteworthy are the splitting of some of the convolutional layer (layer two, four and five). It has been used to split up the computation between two GPUs (I guess because GPUs weren’t so strong at that time). Albeit that might not be necessary today, we have to define the same splitting to reproduce AlexNet results, although if we only use one GPU.

So lets get started: For the model we’ll create a class with the following structure (The entire code can be found in here on github). Note: Read the update message above for a newer version.

In the __init__ function we will parse the input arguments to class variables and call the create function. We could do all in once, but I personally find this a much cleaner way. The load_initial_weights function will be used to assign the pretrained weights to our created variables.

Now that we have the basic class structure, lets define some helper functions for creating the layers. The one for the convolutional layer might be the ‘heaviest’, because we have to implement the case of splitting and not splitting in one function. This function is an adapted version of the caffe-to-tensorflow repo

To use a lambda function and list comprehension is a pretty neat way to handle both cases in one function. For the rest I hope that my commented code is self-explaining. Next comes a function to define the fully-connected layer. This one is already way easier.

Note: I know this can be done with fewer lines of code (e.g. with tf.nn.relu_layer()) but like this, it’s possible to add the activations to tf.summary() to monitor the activations during training in TensorBoard. The rest are Max-Pooling, Local-Response-Normalization and Dropout and should be self-explaining.

Now we will fill in the meat of the create function to build the model graph.

Note, that for defining the last layer we use the self.NUM_CLASSES variable, so we can use the same class with it’s functions for different classification problems. And that’s it, at least for the graph. And because it’s cool and I like them, here is the computational graph of the entire network as drawn by TensorBoard. 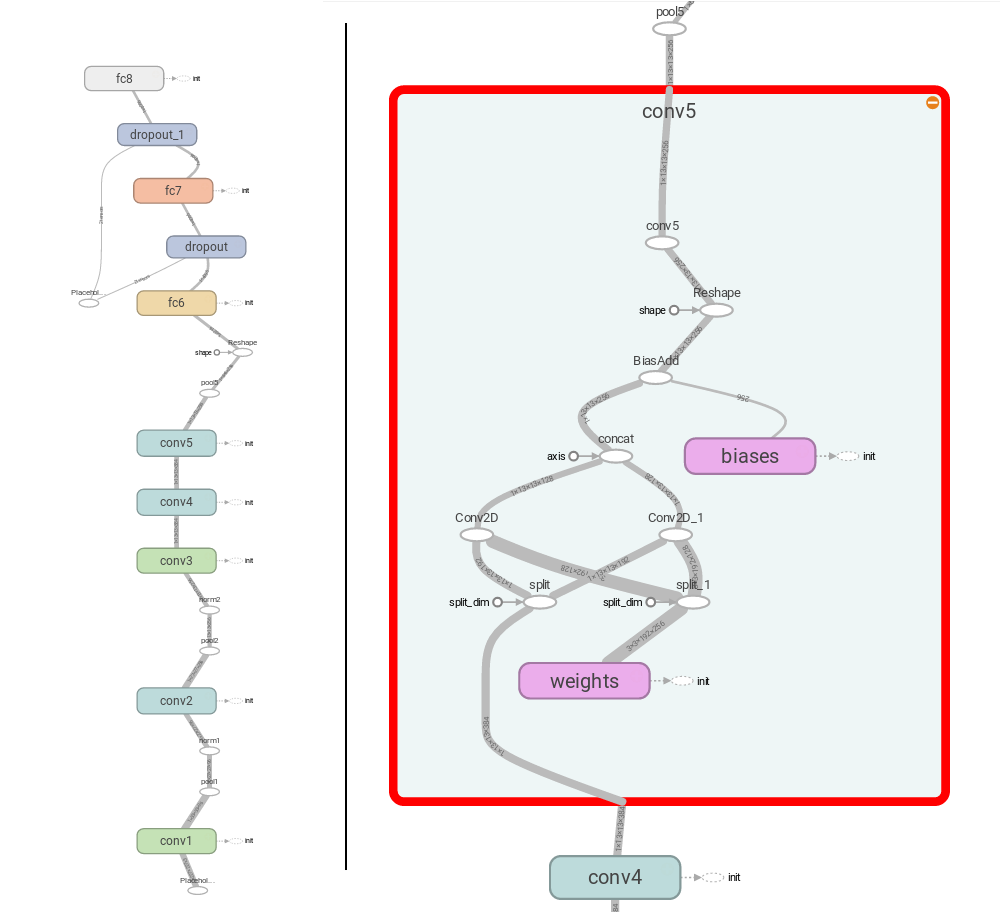 Visualization of the computational graph of Tensorboard (left) and a closer look to the conv5 layer (right), one of the layers with splitting.

Okay now to the load_initial_weights function. The aim of this function is to assign the pretrained weights, stored in self.WEIGHTS_PATH, to any that that is not specified in self.SKIP_LAYER, because these are the layers we want to train from scratch. If take a look on the structure of the bvlc_alexnet.npy weights, you will notice that they come as python dictionary of lists. Each key is one of the layers and contains a list of the weights and biases. If you use the caffe-to-tensorflow function to convert weights on your own, you will get a python dictionary of dictionaries (e.g. weights[‘conv1’] is another dictionary with the keys weights and biases). Anyway, I’ll write the function for the weights downloadable from here (dictionary of lists), were for each list item we have to check the shape of the content and then assign them to weights (length of shape > 1) or biases (length of shape == 1).

With this chunk of code, the AlexNet class is finished.

To test if the model is implemented correctly and the weights are all assigned properly, we can create the original ImageNet model (last layer has 1000 classes) and assign the pretrained weights to all layer. I grabbed some images from the original ImageNet Database and looked at the predicted classes and here are the results.

Three images taken from the ImageNet Database and tested with the implemented AlexNet class. IPython notebook to reproduce the results can be found here.

Looks good, so we can step on finally on the finetuning part.

So after a long read, you finally arrived at the ‘core’-part of this blog article: Using the created AlexNet class to finetune the network onto your own data. The idea now is pretty straight-forward: We will create a model, skipping some of the last layers by passing their names in the skip_layer variable, setup loss and optimizer ops in TensorFlow, start a Session and train the network. We will setup everything with support for TensorBoard, to be able to observe the training process. For the sake of testing the finetuning routine I downloaded the train.zip file from the Kaggle Dogs vs. Cats Redux Competition. 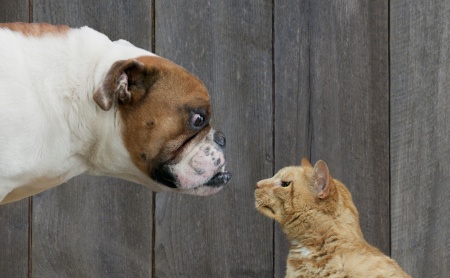 Image from the kaggle competition

I further splitted this images into a training, validation and test set (70/15/15) and created .txt files for each subset containing the path to the image and the class label. Having this text files I created yet another class serving as image data generator (like the one of Keras for example). I know there are smarter ways, but for another project I needed to take care of exactly how the images are loaded and preprocessed and already having this script, I simply copied it for this tutorial. The code can be founded in the github repo. And because I personally like more scripts for educational purpose, I’ll not write the code as a callable function but as a script you should open and look at, to better understand what happens.

After the imports, first I define all configuration variables.

I arbitrarily chose to finetune the last two layer (fc7 and fc8). You can choose any number of the last layer depending on the size of your dataset. My choice might not be good, but here I just want to show how to select multiple layer. I left the dropout probability as in the original model, but you can change it, as well as the learning rate. Play around with this parameters and your dataset and test what will give you the best results.

Now to some TensorFlow stuff. We need to setup a few more stuff in TensorFlow before we can start training. First we need some placeholder variables for the input and labels, as well as the dropout rate (in test mode we deactivate dropout, while TensorFlow takes care of activation scaling).

Having this, we can create an AlexNet object and define a Variable that will point to the unscaled score of the model (last layer of the network, the fc8-layer).

Next comes the block of all ops we need for training the network.

This might look very difficult and complex first if you compare it to what you have to do in e.g. Keras to train a model (call .fit() on the model..) but Hey, it’s TensorFlow. The Train op could be simpler (using optimizer.minimize()) but like this, we can grab the gradients and show them in TensorBoard, which is cool, if you want to know if you gradients are passing to all layers you want to train. Next we define an op (accuracy) for the evaluation.

Everything we miss before we can start training is to merge all the summaries together, initialize tf.FileWriter and tf.train.Saver for model checkpoints and to initialize the image generator objects.

Ok now to the trainings loop: What is the general idea? We will launch a TensorFlow-Session, initialize all variables, load the pretrained weights to all layer we don’t want to train from scratch and then loop epoch for epoch over our training step and run the training op. Every now and then we will store some summary with the FileWriter and after each epoch we will evaluate the model and save a model checkpoint. And there you go:

And we are done. Let’s have a look on the accuracy and loss diagrams of the training process. We can see, that we start of around ~50% accuracy which is reasonable and very fast reach an accuracy around 95% on the training data. The validation accuracy after the first epoch was 0.9545. 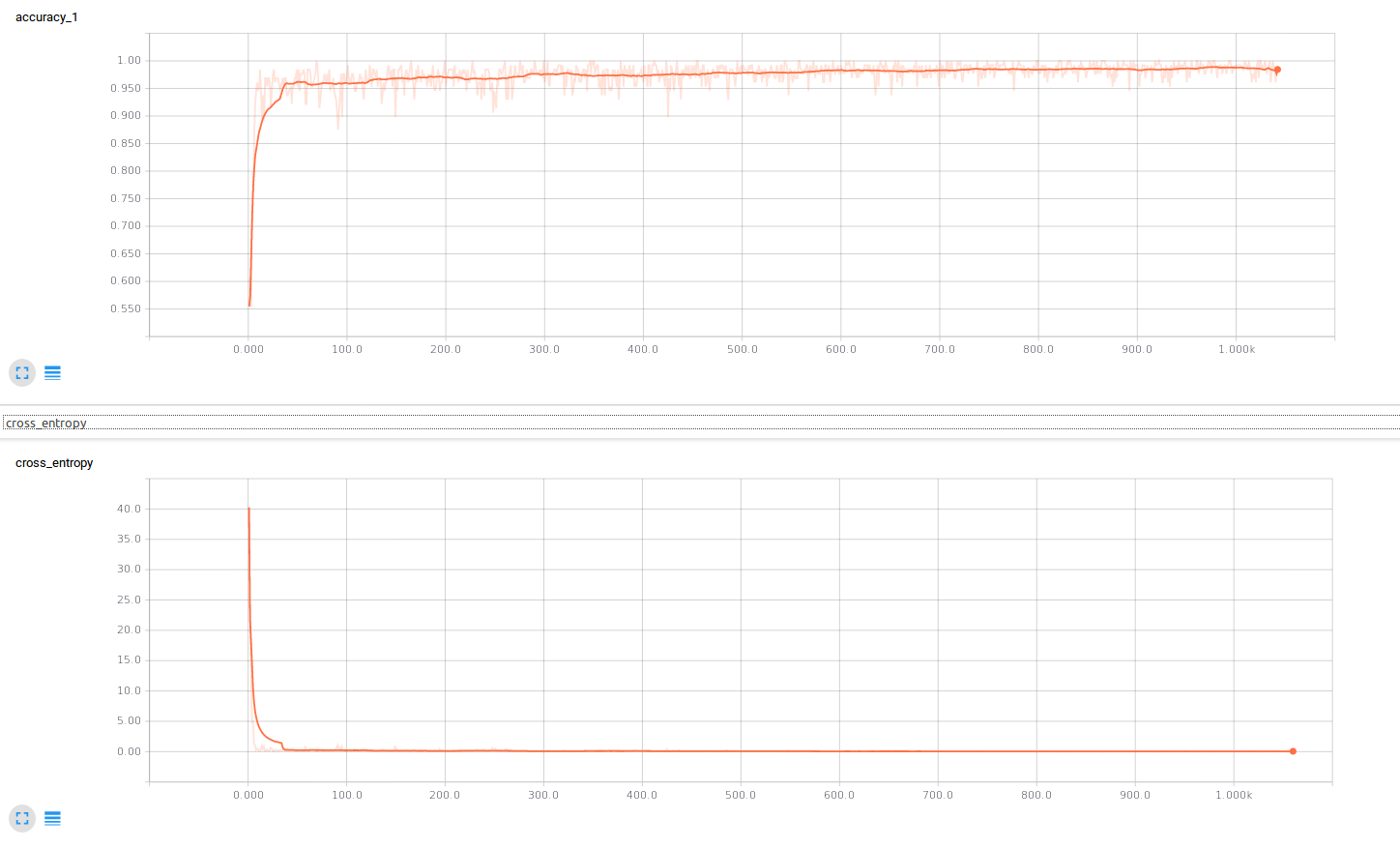 Screenshot of the training process visualized with TensorBoard. At the top is the accuracy, at the bottom the cross-entropy-loss.</a>

That the model is so fast in reaching a good accuracy rate comes from the data I chose for this exmaple: dogs and cats. The the ImageNet Dataset on which the AlexNet was originally trained already contains many different classes of dogs and cats. But anyway, there you go, finished is an universal script with which you can finetune AlexNet to any problem with your own data by just changing a few lines in the config section.

If you want to continue training from any of your checkpoints, you can just change the line of model.load_initial_weights(sess) to

You don’t have to use my ImageDataGenerator class to use this script (it might be badly inefficient). Just find your own way to provide batches of images and labels to the training op and implement it into the script.

If you have any further questions, feel free to ask. And again, all the code can be found on github. But note, that I updated the code, as describe at the top, to work with the new input pipeline of TensorFlow 1.12rc0. If you want to use the updated version make sure you updated your TensorFlow version.